Last week was a pretty tame week. Even though it's summer vacation, I have been finishing up some work stuff. Last week, I was involved in some professional development and this week I am out of town for a few days. After that, I can breathe easy. Vacation will have finally arrived for me. 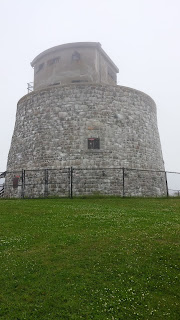 We had some nice weather last week, so we did a little exploring. One day, we decided to go for a neighbourhood walk to visit Carleton Martello Tower. I sometimes forget all that our neighbourhood has to offer. Not everyone can say they live within walking distance of a 200-year old National Historic Site.
Carleton Martello Tower is a small defensive fort that was built during the War of 1812.  It's my understanding that there are many Martello Towers scattered throughout the world, including the Prince of Wales Tower, in Point Pleasant Park.  In the past few years, they've added a lovely interpretive centre. The Tower itself houses a powder magazine and barracks. It also has a gorgeous views of the city, including the port, harbour, uptown and Partridge Island.

Unfortunately, this turned into a bit of a mis-adventure. You see, Martello Tower received some impressive funding recently which will allow for it to be completely restored.  I believe it is going to be totally dismantled and re-built. It's a pretty big deal. I knew this, but didn't realize that it was starting so soon. Needless to say, the tower wasn't open to go inside. The interpretive centre is still open, but that's not very exciting for a 2 year old. The guide in the centre was great, and gave C a little colouring book and explained that we could still explore outside, so that's what we did. It will be exciting to see the tower refurbished and visit it once it is complete.

We climbed all the stairs to get to the base of the tower. 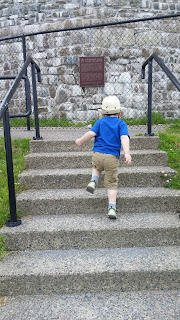 We stopped to look around, but it was a little foggy. I have to say that in this part of the west side, this is what a little foggy can look like. When it's really foggy, you wouldn't be able to see the any of the church steeple or even some of the nearby trees.  It can get pretty thick. Sadly, the normally beautiful views of the city could not be seen that day! 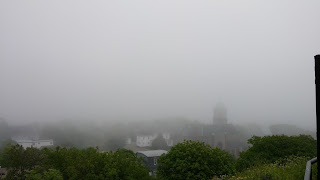 Then we climbed down again. 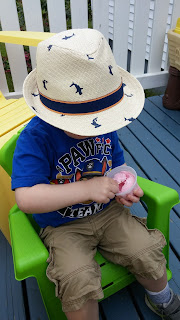 C was a little upset that there was a gate locking him out, but luckily, 2 year olds are easily distracted and we just ran up and down the pathways a bit and stopped to smell the roses (literally!) A little stop at the store for a tiny tub of strawberry ice cream helped end the afternoon on a high note. Eating ice cream with a little wooden stick makes everything better, doesn't it?


Later in the week, we went strawberry picking. C has loved picking wild strawberries in our yard lately, and was doing such a good job, I figured he'd love to see a big berry patch. I hadn't been strawberry picking in many years, but I had a flashback to sitting between the rows and stuffing my face with strawberries as a kid. Our berry picking trip went the same way! We drove to Bates Landing, in Long Point, which is near the Kingston Peninsula. We took the long way, so we could take a ferry ride. 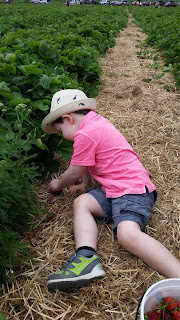 I knew we wouldn't get many berries picked, and we didn't, but it was fun. I picked berries and put them in our bucket, and C would pick strawberries out of the bucket and put them in his mouth. It was a very effective process... for him! He also liked playing with the hay and squishing berries that were on the ground.

I kept telling him that he couldn't eat the berries, but he wouldn't stop. The ladies picking around us kept saying he could eat as much as he wanted! There were so many berries on the plants, and some were starting to get moldy, so they were probably right. There weren't enough pickers for the berries. He was just helping the berries live up to fulfill their destiny of being gobbled up! After getting the berries weighed and paid for, I gave the girls a few extra dollars for the strawberries consumed during our time in the berry patch. It's not like they didn't know. He had red berry juice smeared all over his face! 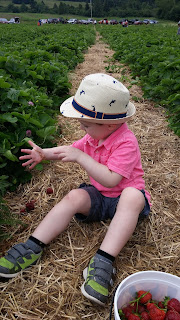 Before stopping home, we went to Kredl's in Hampton for lunch at the Cookhouse and picked up tea biscuits and whipping cream to have with our strawberries that night.

Strawberry shortcake tastes like summer!  There is nothing better than fresh, local strawberries. They taste even better when you pick them yourself. I think we'll be making this a summer tradition. Hopefully, next year, I have a better helper and not just an eater!
at July 11, 2016 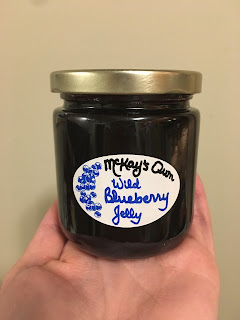